A Modern View of His Life and Work

St. Francis Xavier, one of St. Ignatius Loyola's closest friends and an original founding companion of the Society of Jesus, is most honored by the Catholic Church, other Christian churches, and the Jesuit order for his missionary accomplishments particularly in India, Southeast Asia and Japan. He was born in 1506 in the family castle in the Basque region of northern Spain, the fifth and youngest child of noble, wealthy, and pious parents.

At the age of nineteen years, and after completing preliminary course of studies, he left home permanently, bound for the University of Paris. By thirty years of age, he had earned a Master of Arts degree in philosophy, taught the subject for four years and then studied theology for two years.

While studying at the University, Ignatius Loyola, who was a fellow student, became an increasingly important influence on Xavier. So much so that, despite early reluctance, Xavier eventually made the Spiritual Exercises under his direction. In August of 1534, he joined Ignatius and five other companions in pronouncing vows. Together, Xavier and Ignatius were ordained priests in 1537. In the following year, Xavier went to Rome to share in the discussions that led to the formal founding of the Society of Jesus. Upon approval, Xavier served as the secretary of the Society until leaving for India in 1541.

His missionary travels took him to many places around the world. In fact, Xavier was the only original companion to leave Europe. He traveled from Rome to Lisbon, Portugal and then to India. Along the way, he assisted in many previously established missions; including those in Mozambique and Melindi (Kenya) Africa, Socotra (an island off the coast of Somalia), and Goa (a district on the west coast of India, and the main Portuguese center) and other communities in the southern coastal areas.

In 1549, Xavier began the first Christian mission in Japan where he served in the country for over two years. In 1552, he set sail to begin the first Christian mission in China. When he arrived, however, he was not allowed to disembark on the Mainland. For three months, he waited on an island off of Canton while trying to gain entry into the country. He died on the island of an acute illness at the age of forty-six. Xavier was canonized by Gregory XV on March 12, 1622, at the same time as Ignatius Loyola.

St. Xavier ranks among the greatest missionaries in Christian history. Historians place the number of baptisms at roughly 30,000 people; lore cites numbers up to 100,000. Today, such missionary accomplishments may be challenging to appreciate in light of present day plurality, cultural relativism, and global engagement, yet a great deal can be learned from Xavier in the way he conducted his life and work with meaning and purpose. Three qualities of Xavier are highlighted which are noteworthy in today's modern world.

Xavier was known to have conducted his life's work with great vitality and zeal. For instance, when Loyola asked Xavier to join an expedition to the Far East he was "overjoyed". Even descriptions of how he moved capture his gusto - "he walked with a joyful, calm face" and "everywhere he went he went with laughter in his mouth".

Much of the enthusiasm for his missionary work came from the support and prayers he was receiving from those that sent him and from the beauty from which he viewed his service. He was serving God and helping others. He was helping others by helping them to find God.

Xavier's enthusiasm is underscored when recognizing that his work and life were not easy. Seventeenth century sea voyages were filled with life-threatening dangers. Moreover, by the time Xavier finished University studies, his father, mother and a sister had died (his father had passed away when Xavier was only 6 years old) and his other sister and brothers had married. He felt as lonely as "an orphan". However, it was not only during this time that he felt this way. For much of his life he struggled with feelings of loneliness, depression and chronic feelings of inferiority.

His unlimited confidence in God freed him from discouragement in the face of obstacles and reverses. This confidence enabled him to travel through life with his sense of joy and enthusiasm. He lived his life with zeal for the Greater Glory of God. He wrote to a fellow Jesuits about his safe arrival after traveling, "In this life, we find our greatest comfort living in the midst of danger, that is, if we confront them solely for the love of God."

Xavier set high standards for himself and had ambitious plans for the future. He was a man of quick perception and sound judgment. And while he was fervent, he was known to be so without losing a realistic grasp of the facts. Yet, his goals were not to be "the best" or "first", but rather to make an impact. He was driven by a passion, and an internal energy. He passionately pursued extra-ordinary yet realistic challenges. What motivated Xavier to set high standards was his drive to help others in a way that he believed was beneficial to all persons on earth. Xavier conducted his work in the spirit of magis; a Latin term meaning "more" and used by Loyola to underscore good character in service to others.

Openness to the influence of others

The third quality is associated with Xavier's personality, including how he related to others as well as himself. It goes beyond enthusiasm and passion. Xavier was known to be a charismatic man. He had a "dashing and robust personality" and has been described as "astounding", "decisive", "cheerful", "vivacious", "practical", "prudent", and a "keen, ambitious" boy in school.

Today, he would be described as a "people person". He was successful because of his ability to mix easily with persons of various social-classes, races, and beliefs. Xavier understood people. He learned the languages and adopted the indigenous dress of the peoples he served. Xavier lived the beginning of "inculturation"; he had a deep sense of cross-cultural understanding, and appreciated that God's presence was already present in all cultures, peoples, places and things. His appreciation is noteworthy because it was not always true of his beliefs. It grew out of his experiences. Xavier was certainly not a flexible or passive individual. He was decisive and known to have the "fiery" personality and temperament of the Basque. Thus, Xavier's experience of cultural plurality was ultimately exhilarating, but initially frustrating, confusing and challenging.

While trying to unify the world under Christ, Xavier was discovering the depth and extent of differences. He learned that God was revealed within those differences. At first, differences were viewed as obstacles to his goal. Later, he discovered the variety and beauty of languages, faiths, cultures and living conditions. He began to feel and know God's work. He was transformed in his understanding of "difference" and "oneness". While his work had a profound influence on others, he came to recognize that he was equally influenced through the interactions and contacts. As former Superior General Fr. Peter Hans-Kolvenbach, S.J. stated, "When the heart is touch by direct contact, the mind may be challenged to change" (SCU, 2000).

These three qualities of St. Francis Xavier are reflected in a description of him written by a companion: I have never met anyone more filled with faith and hope, more open-minded than Francis. He never seems to lose his great joy and enthusiasm. He talks to both the good and the bad. Anything he is asked to do, Francis does willingly, simply because he loves everyone.

The Seal of Xavier University 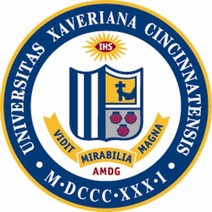 The seal of Xavier University reflects the Jesuit order and the life of St. Xavier. The five vertical stripes suggest the coat of arms of the Xavier family. A right arm wearing the Jesuit robe holds aloft a cross signifies Xavier's preaching and missionary works. The three seashells denote his three journeys into Asia. Above the shield is the Jesuit seal, IHS, the first three letters of the name Jesus in Greek. Below is the Jesuit motto, A.M.D.G. [Ad Majorem Dei Gloriam], which translates "to the Greater Glory of God", and Vidit Mirabilia Magna, a phrase from the psalms applied to Xavier which translates "he has seen great wonders."

This paper is based on a presentation by Debra Mooney, Ph.D. offered at the annual Celebration of Excellence, an event recognizing Xavier's faculty and staff participants in mission-related professional development activities. This occasion, April 10, 2006, was one of the campus events marking the 175th anniversary of Xavier's founding and recognizing the Jesuit Jubilee year.