Thanks to the generous support of our donors, the following students were awarded the Fredin or Peter scholarships to support a semester or academic year in France. Félicitations!

Fredin Scholar - Paige Lumpkin is a junior at Xavier with a double major in Chemical Sciences and French. Her passion for French has always been noticeable ever since her first class in the 7th grade. Ever since then, she has strived to keep learning the language and has grown deeper in love with the culture.

She is originally from the suburbs of Chicago, specifically Lombard, IL. Some of her hobbies include working out, listening to music, hanging out with friends, and having personal Bible studies with others. Sharing the gospel far exceeds the other hobbies she enjoys.

As a 2021 recipient of the Fredin Scholarship, she plans to study abroad in Paris, France during the fall semester of 2021. She is beyond excited what adventures await for her!

Fredin Scholar - My name is Alison Ruffolo and I'm from the south suburbs of Chicago. I am a double major in French and International Studies at Xavier. As one of the 2021-2022 Fredin scholarship recipients, I plan to study the 2021-2022 spring semester in Paris. I am currently in my eighth year of practicing and learning French, and I'm quite excited to see how studying in France will help me learn and grow!

Fredin Scholar - Hi, my name is Emily. I am going to be studying in Paris in the Spring of 2022 thanks to the very generous scholarship. I am a French and Spanish double major and after Xavier I would love to interpret or translate abroad.

Peter Scholar - My name is Allie Greenwell and I am the Peter Scholar recipient of the 2021.  I am a double major in French and Environmental Sciences with a minor in Economics.  I plan on spending the Spring of 2022 in Grenoble, France.  On campus I am involved in Women’s Club Soccer and I am a tutor in French and Biology.  I am beyond excited got the opportunity to study abroad and experience the cultures of so many different countries! 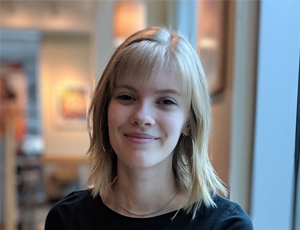 My name is Ava Poindexter, and I'm the Fredin and Peter scholarship recipient of 2020. I'm a double major in French and International Studies with a Europe concentration, and I plan on spending the 2020-2021 academic year studying in Paris with the help of the scholarship.

Marta Berglund is a senior at Xavier with a double major in digital innovation, film, and television (DIFT) and French, with a minor in communications. She is originally from Saint Peter, Minnesota, but her family has also lived in Kansas, Michigan, Hungary, and the Czech Republic. Marta started learning French as a freshman in high school, and has continued since then. Outside the classroom, she loves hiking and being outside, photography, and spending time with friends. At Xavier, she is involved in the Xavier University Television Association, X-treme Fans Board of Directors, Office of Undergraduate Admissions, and Office of Academic Support.

As the 2019 Fredin Scholarship Recipient, Marta studied in Grenoble, France during the spring semester. Her favorite parts of the semester were meeting people of all ages, interests, and countries of origin, as well as being in a city with so much to do for students. After graduating from Xavier, she hopes to find a job in film or television production, or in relation to the French language. 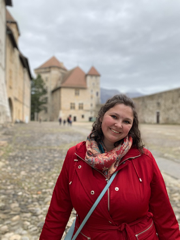 My name is Rachel Purpura and I am a double major in history and French at Xavier. I began French in high school and continued in college. At Xavier I am involved in TEDx, EmpowerXU, French Club and the Office of Academic Support. As the 2019 Fredin Scholarship recipient, I went to Grenoble, France in the Spring of 2020 during my sophomore year and was able to greatly improve my French by being immersed in the culture. Before the semester was cut short, I loved the people in Grenoble and all that I was able to see just by walking or taking a short tram ride. It was incredible being able to travel to other cities and countries and be able to see all the history that occurred.